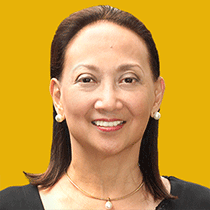 Malu Dy Buncio is the Chief Business Development Strategist of Mansmith and Fielders, Inc. For almost twenty years, she has worked for Avon worldwide at all levels to develop the company’s performance and leadership. She served as the Executive Director for Regional and Business Development for Asia Pacific under Avon Products – Asia Pacific Regional Office where she successfully opened Avon Vietnam. She was the General Manager of Avon Cosmetics, Inc. (Philippines.) when the company has received two Chairman’s Awards for exemplary business performance and the Best Employers of the Philippines Award from The Asian Wall Street Journal in partnership with Hewitt Associates and the Far Eastern Monitor.

She successfully managed Avon Indonesia as the President Director, despite the worst political and economic crisis in Indonesia where she received the Chairman’s Pathfinder Award for ‘managing thru Political Crises’ in 1998.

Malu has been a management and business consultant for some of the biggest and looked upon corporations in the country for quite sometime now. These corporations include The First Commercial Bank, Insular life, Swedish Match Corporation, the media giant ABS-CBN Broadcasting Corporation, and also, Filinvest Properties Inc.

Malu completed basic course in Interior Design at the Philippine School of Interior Design. Her educational background includes a Business Management Program at Asian Institute of Management. She graduated with Bachelor of Arts Degree Majoring in Communication Arts at Assumption College where her thesis was bestowed with the Marie Eugenie Award.